The long day ahead started with another trip direct from the Maracana Stadium to the Rio bus terminal.

I am not one for scoring points, but I already have a 1-0 during this tournament when other photographers could not fly out of Rio because of the fog. 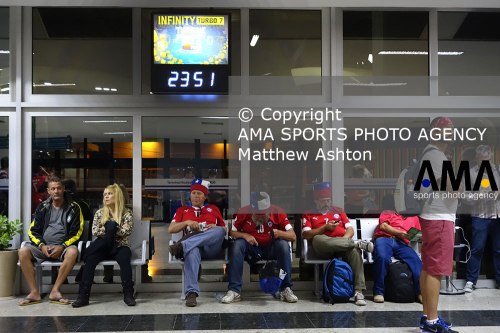 The bus terminal was seemly busy. Fans from Chile, Argentina, England, Mexico and Colombia making up most of the numbers.

Everyone being respectful and polite except for a few annoying England fans pushing.

Some England fans could quite plainly not only not speak the lingo but not read it too..

I guess he made it to the Gents on time!

Already ticket touting was the order of the day for some. Tickets changing hands for US$1,000.00. 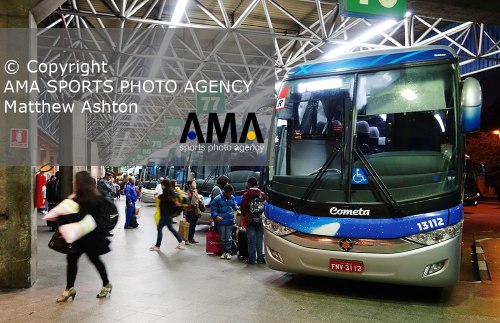 We boarded another luxury 5 star coach and I fell asleep whilst listening to my iPod. The next thing I knew we had arrived in Sao Paulo!

We got to the stadium for 7am. Kick off was at 4pm. But as on previous jaunts to SP, what else was there to do!?

The time went quite quickly. Editing, booking more travel, catching up on emails as we STILL don’t have internet at our Rio abode – despite paying large deposits under contract.

The main event was arguing with security officials again who wanted to confiscate water based toiletries and mosquito spray. Perhaps if this industry does go tits up as everyone keeps suggesting it does – us snappers should form our own law practice as we all certainly know how to argue the case and mostly win!

Pin pointing out that the terms (in Portuguese) were flammable that were prohibited, it was therefore wrong to simply confiscate ALL forms of sprays!

I pointed out that cameras were banned from stadiums too according to the little symbols but we were of course let in.

Brazilians are not nasty people like in other parts of the world, they simply adhere to rules but again never question them. Some bright spark has most probably informed them to remove all sprays they find in media bags as that cuts out the need to assess if something is flammable.

However, a lovely chap carrying about 3 guns, what looked like pepper spray and a large baton dressed in military uniform and wearing fetching beret hat as though he had come off the film set of Who Dares Wins saw sense. Gesturing to light a cigarette lighter and then using his hands whilst speaking fast Portuguese he told his team that mosquito spray was not a flammable liquid.

“AAAAAhhhhhhh” they all went and proceeded to apologise in their native tongue and shake our hands.

On the photography front, life was dull. All of the fans were still asleep or in town.

Sky TV who are made to stay well away from the stadium wanted my services but it was impossible to get to see them on this occasion.

At midday I collected my pitch ticket. Photographers have to choose a seat and sit in it for 90 mins. However must exchange seats at half time like a mad game of musical chairs.

And so the main event… As I have stated previously, here in Brazil the main stars of the show are Uruguay, Argentina, Germany, France, USA and of course the hosts themselves, Brazil.

England NEVER gets featured. Not on the TV, not in the newspapers, not in the shopping malls and not in the teddy bear shops.

Compared to the oven of Manaus, Sao Paulo was very cold. I had three layers on, it was like doing an evening match in South Africa again.

I felt that buzz of excitement in a chilly stadium again – which looked just as good from pitch level as it did from the tribune where I was situated during the opening ceremony.

I’m a lover of football stadiums and this one is growing on me. I was not too enthused by the pictures I had previously seen, this was the place where some of the stadium collapsed and killed some of the workers and the last time I was in SP I did not have the best of times – but it’s probably number 4 in my favourite Brazil World Cup Stadiums in the inside category!

For the outside and setting, nothing beats Salvador, but sadly I am not guaranteed to visit during this tournament.

Uruguay fans out numbered England by probably 6 to 1. In World Cups gone past, games of this magnitude would have seen England take over the stadium. Even in the Far East of Japan, England fans dominated the stadium in Sapporo when they faced Argentina in 2002. Here though there was just a small pocket of fans behind the goal. 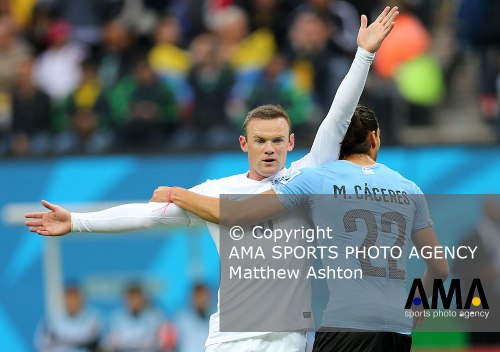 At the end of the day, England fans have been held back by the greedy Brazilian people. Fans could not simply not afford to travel. When deciding and having to make decisions and book in January/February prices were sky-high for both transportation and hotels. FIFA have been returned thousands of sponsor tickets because of this which says everything.

However on game day, I wish I had of taken along another AMA photographer to the game. As an agency we could have easily afforded it if we had of paid last week’s prices. Back in January though the prospect of taking more photographers and then paying for lodgings and transport would have nearly bankrupted us. It’s all very frustrating!

And of course, FIFA’s stringent accreditation deadlines have well passed by now.

Suarez was back and stole the headlines.

England were subjected to lots of South American holding which we don’t experience in European football much – certainly not to the extent the Uruguay team were getting away with.

Sending images in real time via the internet back the UK for editing went well. Very well. I am almost sure that my goal picture must have hit the newspaper desks quicker than anyone else – the trouble is that the story did not go the way of England and there was no need for it to be published. 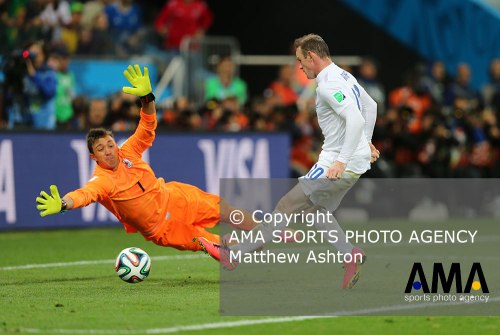 The next day newspapers wanted pictures to reflect the game. This certainly didn’t!

Liverpool team-mate Glen Johnson helped Suarez with his cramp… this apparently made the English newspapers.

I got some OK style pictures of the Rooney family watching the game from the other side, but with respect, the English newspaper ‘news’ photographers had got all that wrapped up with some stunning shots.

The winning goal by Suarez was not at my end and ensured England to a probable exit from the tournament.

Joe Hart was in tears though I must say that he did very well not to burst out crying.

My mate Brian and his Shrek were left to contemplate what could have been if England had have been given a more kinder draw.

I found the reaction to England’s defeat on Twitter and Facebook totally amazing as over here England are classed with as much chance to getting to the semi finals as a Division Two team reaching the FA Cup Final.

We left the stadium, got a media bus to a media hotel and had a quick bite to eat. The first meal of the day really.

Then a taxi though downtown Sao Paulo. At times it was like being on 5th Avenue in New York – down another street and all you could see was graffiti covering quite literally every building in sight – to some of the poorer areas of the city.

Arriving at the bus station once more, our next stop was to the home of Brazilian football giants Cruzeiro and Atletico Mineiro.