With a mixture of getting car rentals as though they are going out of fashion – I think I am up to my 8th at the moment, to staying in dive Motels out of town, my 33,500 mile July trip is going sweet.

At the end of the day the only thing that matters is the final amount that has been spent.  Not accounting for shitty rows and columns by crazy accountants who are the ones seemingly trying to break up this once fine industry that I am in. If it means staying in the same five star downtown hotel as the Mexico team, traveling to and from the airport on some amazing local metro trains costing only $3 and walking to the stadium, that’s what I do.

The trip has seen me get or as the locals say gotten a flat tyre in LA to having some ‘person’ spill some Coca Cola on to my computer which resulted in the keyboard packing up and not being able to email or edit images for three days.

It was an accident, though the $600 repair bill was half the price of a new computer.

Eight nights have been spent sleeping on American Airlines night flights traveling from coast to coast – again no hotels, however, even by my standards I need to do some laundry pretty soon!

I am not the biggest Liverpool fan but Steven Gerrard was outstanding for Galaxy. Perhaps one day the fans will know who he is. Perhaps by the next decade the media will report on soccer games that in fairness are actually quite good. 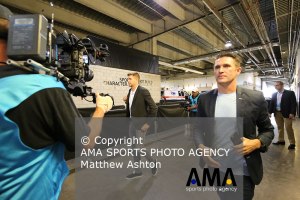 Frank Lampard was injured, but I managed to find him. The locals none the wiser that he was watching from a box in the unusual setting of the New York Yankees Stadium, NYCFC’s new home. 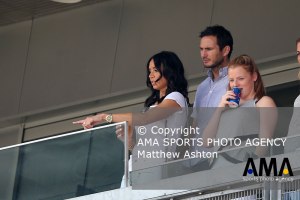 A man on a horse came to watch Albion train. 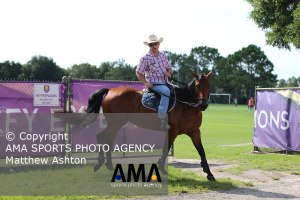 Once again I am glad I did not become a footballer.

Documenting training in the dark at 6.30AM, before breakfast and two nights of going to sleep at 3AM, it was a tough few days.

Yet, there is always one assumptious fan who believes that you are on holiday in Orlando doing DisneyParks and visiting the Space Shuttle. Florida is a sweat box at this time of year. Some players losing half a stone a day.

I made a title page for the ever lovely Gareth McAuley who made a video diary of his trip to the USA. Albion lost 1-3 as Kaka was awesome for Orlando City. The plastic pitch was anything but awesome yet it was confirmed once again that working in a football club’s media department is one of the most thankless tasks in the whole wide world. Again cries from the keyboard warriors of “they are going down” – “get in some new players” overshadowed the message that WBA had visited one of the most friendly clubs on the planet with each and every player being behaved on an implacable level and was a credit to the club.

In Seattle the grass at the Manchester United game was sprayed green. The stadium officials kindly letting me dump my gear in the main reception so that I could explore the wonderful coastal city for five hours. Upon my return the grass looked lush and green! Apparently there was a concert on it a couple of nights before, hence it’s yellow appearance.

Then to the place where The Wire is set, Baltimore.

I don’t know if they were extras in The Wire or real Baltimore Police Officers but any excuse to see some Soccer Ball and they were in the stadium! 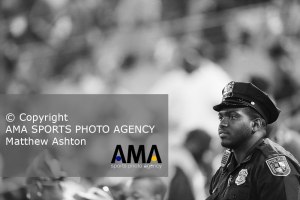 I had the surprise of my life when an ex-Shrewsbury Town player was amongst the Jamaica substitutes. We had a good chat despite a CONCACAF official watching me like a hawk – I never asked Chris Humprey for his autograph so all was well. The Americans are so very strict on the ruling that no media getting autographs or selfies with players. 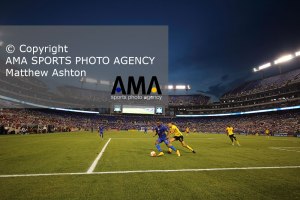 Moments earlier, my computer got soaked by some Coca Cola and so when I arrived in LA, my planned time to visit Canon to get one of my cameras fixed which had broken down earlier in the week, to making most of the sunshine – was over taken by a trip to the not so nice part of Sunset Strip Boulevard and to an amazing Apple Mac repair man.

Consequently it was 4AM until I had caught up with my editing, only to be chucked out of the hotel by midday and then encounter a horrible 50 min endurance test in trying to find the correct parking spot for photographers at The Rose Bowl in Pasadena.

Despite there being over 2,000 spare car park spaces on some of the lots, my philosophy of America being a great place for a holiday but nothing but traumatic if you are working to be totally true. Americans can not make decisions unlike Europeans. There is no thinking outside the box. The idea of finding a solution is alien. The fact that you could not collect a car parking pass because you were working at another venue a four hour flight away is not up for contention. Cries of “You should call your contact Sir” result in the early stages of being Michael Douglas in the epic film Falling Down.

Although the exercise was to capture FC Barcelona in their new Nike kit, Gerrard was a joy to follow. Far too good for Galaxy if you ask me. My over riding memory will be though the amount of FC Barcelona shirts worn by the locals watching the game. If Dave Ghan was performing in the said stadium where the infamous 101 film was made of Depeche Mode, cries of “Good Evening Pasadena” would have been replaced by “Hola Barca..!” A sell out attendance of over 90,000 also. 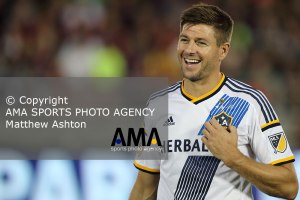 And after a 5AM exit from California to Georgia via Chicago on more American Airlines aeroplanes, which for me meant a solid 8 hour sleep.