A bad weekend for Osaka

I’m back in Japan! 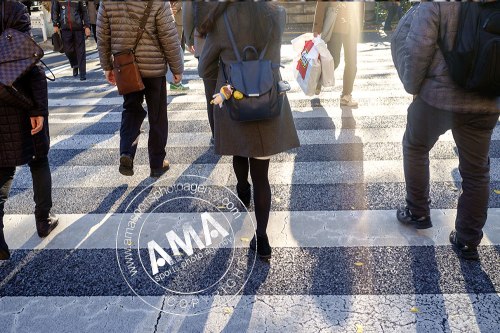 Lots of major cities have two teams – Manchester City / Manchester United, Roma / Lazio, AC Milan /Inter, Boca Juniors / River Plate, you get the idea! The point is that in Osaka, Japan there are two team Gamba Osaka and Cerezo Osaka.

Both featured in the end of season J.League Play Off games this weekend. 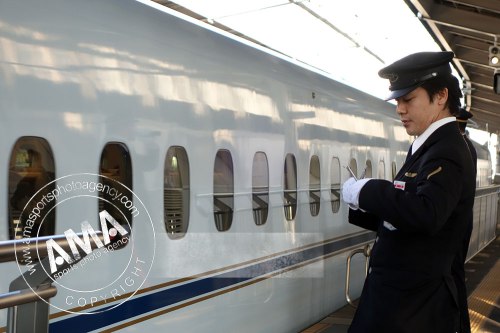 A near five-hour trip from Tokyo, I arrived in Hiroshima – Tokyo Metro, Shinkansen to Hiroshima via Shin-Osaka. By the time I got to Hiroshima, it was dark. A £2 shuttle bus took me to the stadium on a journey that was advertised as 27 minutes and took 27 minutes. 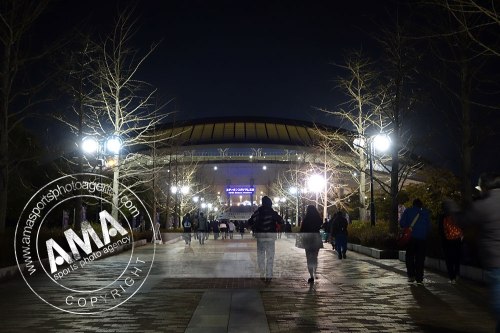 Today’s game was a Final to determine the Champions of the 2015 J.League. The league is set up so each team plays each other once, with a Stage One winner. The second half of the league them takes place with the reverse fixtures to determine the winners of Stage Two.

A playoff between the top teams results in the Championship Final. Sanfrecce Hiroshima hosting Gamba Osaka. 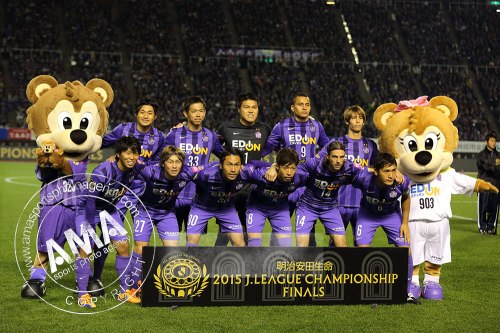 Thankfully I was just there to document the ‘feeling of the game’… which suited me as I sat at the wrong end for the goals! 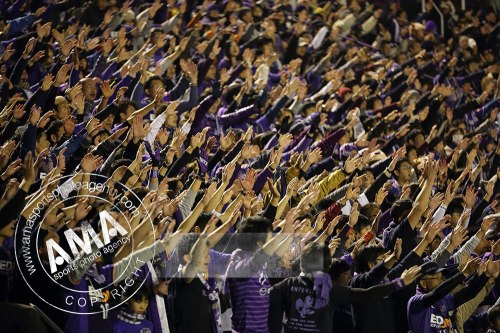 As always the Japanese fans were nothing short of amazing. 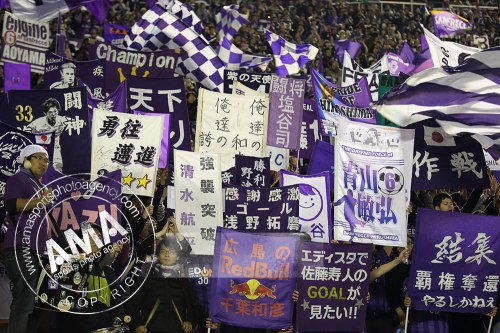 Taking the best elements of football in Argentina and Italy, this is one of the reasons that I believe the J.League is the most colourful and spectacular.

Sanfrecce Hiroshima came out top 2-1 and thus were crowned the J.League 2015 Champions. 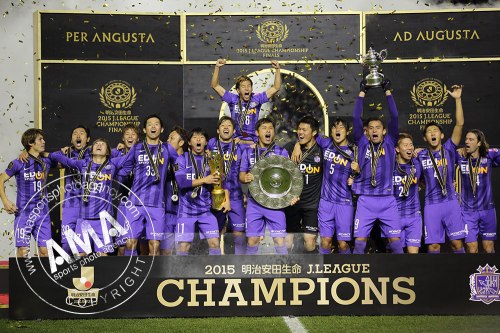 The presentations were a very dignified affair. There were no TV cameras blocking photographers like in some European countries. Everything planned and executed to perfection. 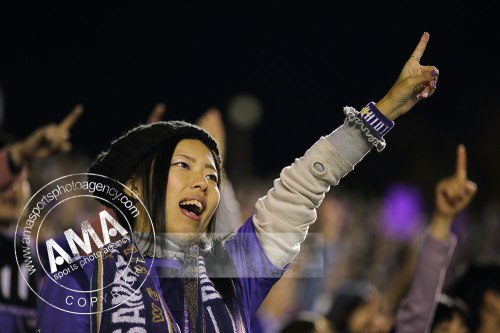 The players lifted the manager into the air to celebrate, but as they lifted him the wrong way so that no one could see him, he had to endure it all over again after the press officers made insisted on a take two but this time in front of the cameras! 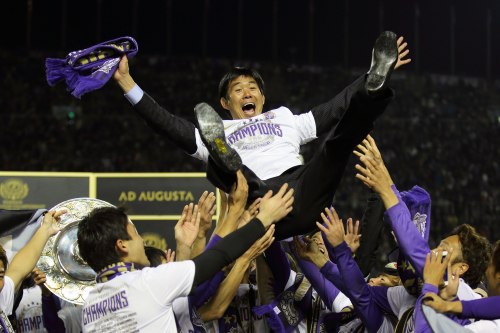 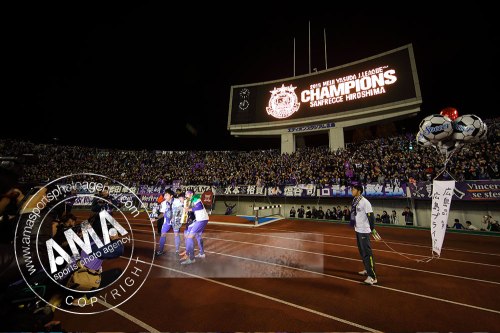 My kind Japanese photographer colleagues ensured that I arrived safely at my hotel which I booked close to the Shinkansen Railway Station. A very small hotel room compared to European and American standards. 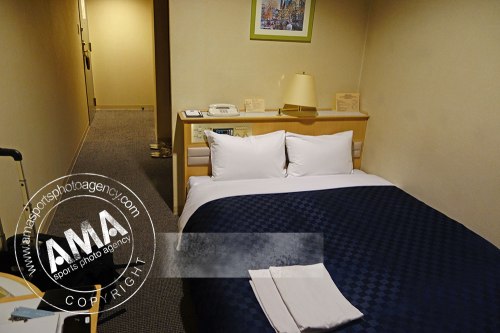 After a good nights sleep, I was back on the bullet train heading again North for the second of my weekend games. This one taking place in Osaka. 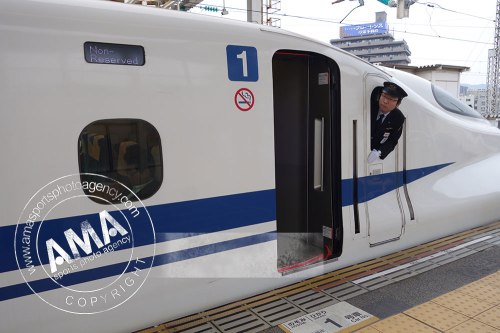 Osaka is one of those places that I have been many times to but have never had the chance to look around. Thankfully I stay here for three nights on my next visit later next week but this visit was a very quick in and out one. 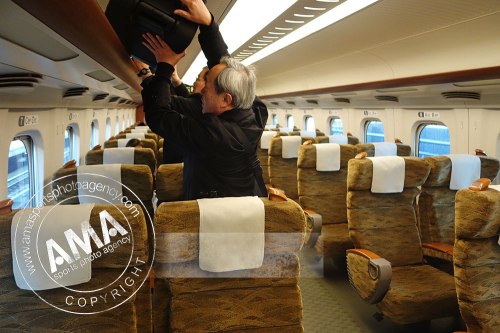 With electricity plugs and using my rented 4G dongle – which worked flawlessly through tunnels and indeed works on the Tokyo Metro / Subway (underground), I travelled faster than my car ever could editing my pictures from the day before whilst taking in the Japanese landscape.

Upon arriving in Osaka, a 20-minute local train service took me direct to the stadium where I spent many a fine day during the 2002 FIFA World Cup. 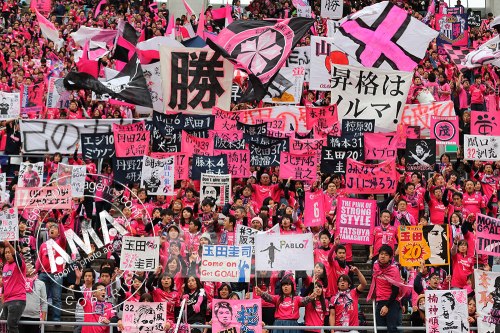 Again it was a dream to capture the Japanese fans. Crazy Health and Safety laws ruin English football. How many of these fans ended up in hospital because of  their banner waving antics..? None! 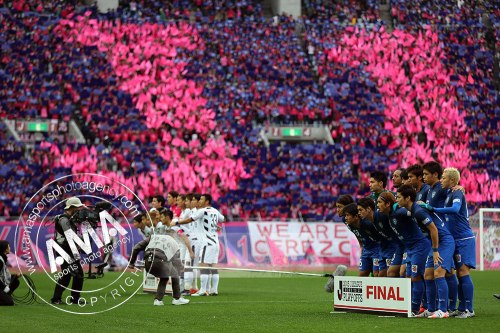 My favorite picture from the weekend was when the Cerezo Osaka fans displayed J1 by holding up plastic sheets as both sides posed for team photographs. 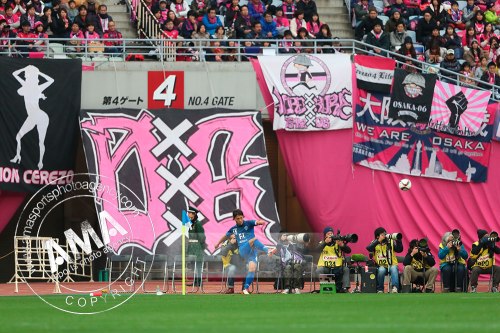 Avispa Fukuoka looked strong, but the home support of Cerezo Osaka tried to suck the ball into the net. As Fukuoka finished higher in the league of this playoff game, if it was a draw, then Fukuoka got promoted.

I was at the wrong end again though as Cerezo Osaka went 1-0 up. 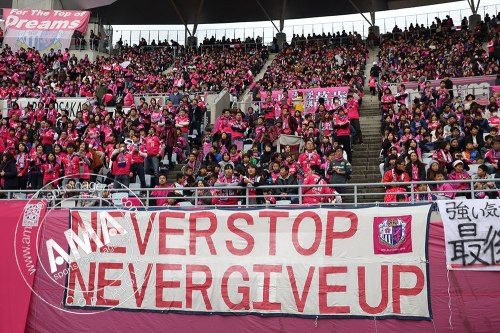 The fans went understandably crazy. Cerezo nearly there – playing their rivals Gamba in next season’s J.League, until the 87th minute when Fukuoka scored a last-gasp equaliser. 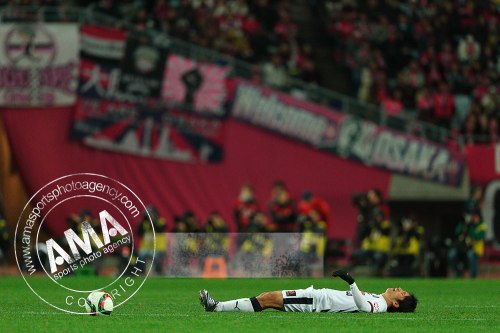 …which I totally missed and was at the wrong side when the scorer ran to celebrate in front of his fans. However instantly for me, the story was how the two Osaka teams had failed, so this picture suited me! 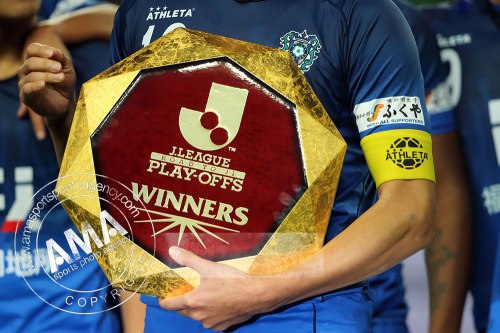 When there is FA Cup action in England, us photographers always try and look out for homemade tin foil trophies. The Japanese do the same, but dare I say with much more grace and effort! 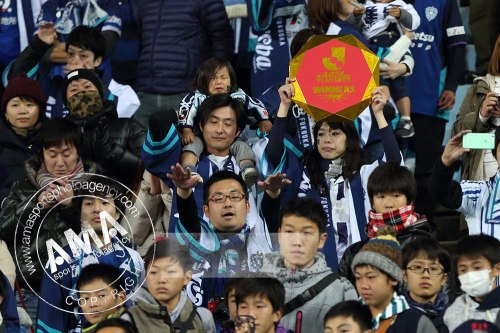 Nearly every one of the Cerezo Osaka fans stayed behind to watch the winning team not only get their trophy but also witness the celebrations. In most other footballing cultures, one-half of the stadium is empty by the time the trophy is being presented.

As the Japanese fans swept up the terraces, I took a leisurely walk back to the photo room to see all of the Japanese photographers edit their pictures.

And how insignificant did I feel?! Some of their pictures were stunning! Yet they pointed and made “awwwww” noises when looking at my work.

An utter cultural difference. I have the same cameras as the Japanese photographers, but their execution was so more clinical. So better colour balance, content and eye-catching images to the mundane crap I see in England.

Tomorrow I have to talk to some of the J.League photographers about how an English eye approaches a football match. I will have to edit carefully as I know they will be eager to see my work from this weekend!

But congratulations to the teams from Hiroshima and Fukuoka. There will certainly be no street parties in the city of Osaka this weekend after BOTH their teams failed in spectacular fashion. 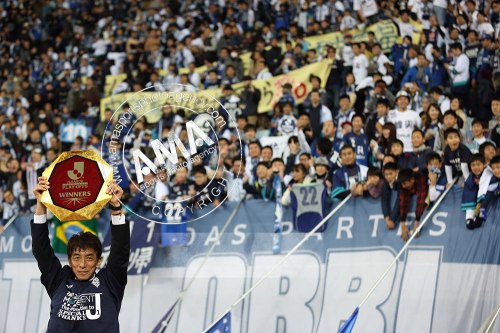 The bullet train returned me to Tokyo with a massive haul of images to edit. The joys of being in a completely blacked out room and no screaming cat waking me up at dawn resulted in a 17-hour sleep! Though in three days here, I have already walked a staggering 23 miles. The trouble with Tokyo is that is great in the day, but even better at night.

4 responses to “A bad weekend for Osaka”