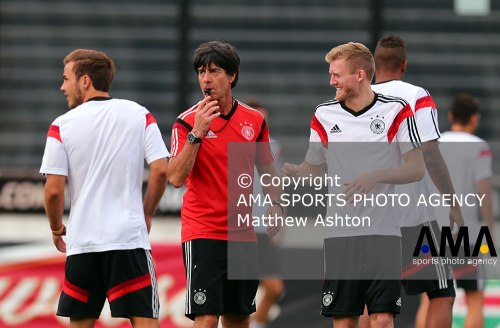 Training Sessions the day before the FIFA World Cup final are a bit of a tradition.

Usually they last one full hour for each team and it’s usually a great place to mingle, swap numbers with foreign media and there is always a good vibe. At the final itself, it really is just another game, but these training sessions are normally  when it starts to feel unique and very special.

Prior to this is, normally I have a very good nights sleep… However a bottle of Amarula got the better of myself and one of my flat mates and it was well past sunrise before I went to sleep.

At 1PM, I arrived at the Maracana Stadium media centre in high spirits but soon went on a downer when I discovered I had missed an unannounced photocall with the singer Shakira who was singing at the closing ceremony.

I had to take the attitude of what you don’t have you never miss and began to think about what I would do during the training sessions later on.

However, at THIS FIFA World Cup, it changed. The two teams were unable to train on the suspect Maracana pitch and instead went to Rio based famous football team, Vasco de Gama.

After a 20 minute FIFA Media bus ride to the training location, my eyes were wide open.

It’s fair to say I have been to the odd stadium in my life time. I am known for slaughtering the likes of the Nou Camp in Barcelona and constantly show my love for the Westfallen Stadion in Dortmund and the San Siro in Milano. I love the quirky and adore most of the stadiums / grounds in Wales and Japan for various contrasting reasons. I grew up going to Shrewsbury Town’s enchanting Gay Meadow but truly, the Vasco de Gama stadium was something else.

The outside of it kind of resembled Fulham or Ibrox – an over the top entrance that does not resemble the an assumed stadium frontage.

The inside was equally visually stunning.

The terraces painted black and white – the clubs colours, and a huge red cross (the badge) finishing it off. 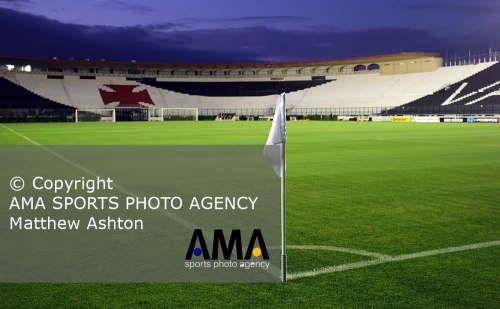 I should have been doing an in-depth feature on the German team ahead of their FIFA World Cup Final appearance. However, the stadium got the better of me!

After grabbing a couple of frames of the Germans, my instincts were overcome by the love of my new surroundings. 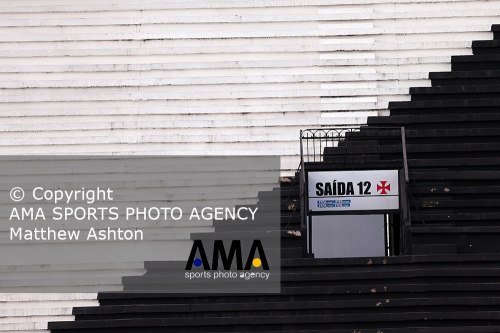 The training session sadly only lasted 15 minutes and we were bussed back to the Maracana Stadium and camped out in the air-con chilled Media Centre.

The discussion on the bus back was about the stained glass windows in the main stand, how the club logo was embedded in the architecture and questions of what it must be like to attend a big game here filled the conversation.

After a quick edit, in no time we were back on the bus and were back at the Vasco stadium 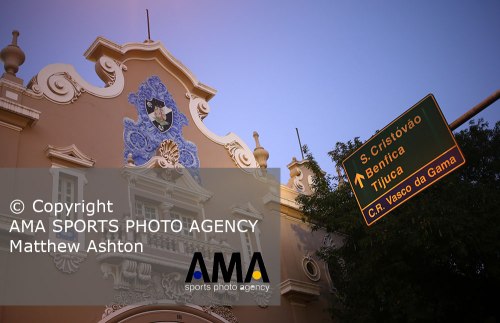 As the Argentina team made us wait by watching the second half of the Third Place Play off between Brazil and Holland, I did some exploring.

Front the gents toilets to the four stands, I quickly complied a nice feature on this amazing football theatre. 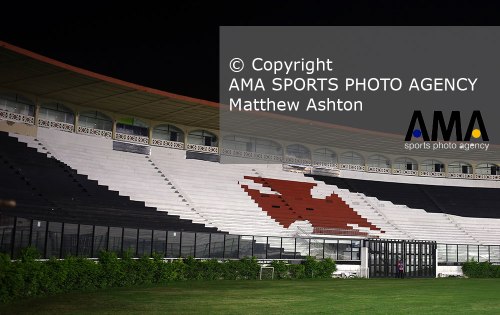 Eventually the Argentines appeared. It was time to work and concentrate.

The floodlights were not the best.

Ideas of returning one day with a wide angled lens and doing a photo documentary feature on a match-day, turned to a black and white one as we all struggled with the different coloured floodlights.

Despite Messi and co being on the pitch, my attentions were still drawn to the stadium. Under lights it appeared to be even more of a romantic venue.

The end of the session finished very quickly as I battled my way through the crowds outside and back to the media bus.

After a quick edit, a taxi home, I was asleep by 9pm.

Tomorrow I had the FIFA World Cup Final to cover.