I knew it would come. The storm. Not the lightening but a bolt that would break the calmness.

And it had to be in Atlanta – the city I had a horrendous time in when I realised all I wanted to do was be a football photographer after failing miserably doing Athletics, Swimming and the like at the Olympic Games in 1996.

A change of mentality for today. No more stock. I needed to get some ‘nice’ pictures. Not mundane repetitive ones of players running with the ball.

It started off well, with the Panama number 7 on the subs bench proudly putting out his shin pads for me to snap when he noticed me looking at them.

Batteries were charged for another double header in the Georgia Dome. First up was USA v Jamaica. The Americans were expectant. The fans were expectant. CONCACAF were too, hoping for a USA v Mexico final. Jamaica had other ideas.

There was a silence like no other at the end of the game. You could hear the Jamaicans celebrating on the pitch. The non-Americans were sniggering with their heads down, me included. Looking for pictures was tough. There was no heart wrenching dejection, no Gazza tears, just men in Nike kits walking off the field not looking anywhere.

Even the man dressed as a budgie – sorry the American Eagle, didn’t really seem THAT bothered that his nation had been defeated.

With the American photographers packing putting their lenses away, I ran to the other side of the goal and captured Clint Dempsey and manager Jurgen Klinsmann, the only ones who did look as though they cared.

If this had of been in England, the national media would have already have a list six long on who would replace the manager. I felt strangely alone, there was only myself capturing these moments. The National Team manager walking off after being knocked out in the semi final – back home these type images would be seen for days on the front and back pages.

Never Assume Anything – something my NCTJ Photojournalism Tutor Paul Delmar kept brainwashing us with. His words still ring true today. Next up was Panama v Mexico.

A challenge which would have never been looked at in an English lower league game, at the very most resulting in a yellow card with the most stern official in an European fixture, somehow got – or in American speak – gotten the Panama star striker sent off.

The Football Gods of the Beautiful Game however did their stuff and Panama went on to score with ten men and despite many other crazy decisions, some fine unpunished play acting by the Mexicans, it seemed a dead cert that Panama were through to the final.

At every opportunity, Mexico players kept communicating the fact that the Panama striker had raised his arm resulting in his dismissal.

Then in the last minute of injury time, Mexico attacked, the forward fouled, knocking the Panama defender over. 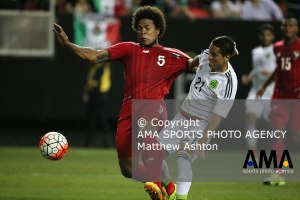 I head the whistle go and assumed that was it. The goalie will take the free kick and the game will be over. But oh no! Referee Mark Geiger somehow deciding there was a hand ball, awarded a penalty.

Panama walked off… and for ten minutes seemingly refused to play.

Eventually something happened and the game was restarted…

Mexico scoring but no celebrations – as said in the post match interviews “Why celebrate a goal that you did not deserve?”

Still with ten men, Panama were involved in challenges more suited to the Wrestling Ring as clotheslines replaced two footed tackles – the ref only issuing yellow cards. To be fair, the contest was not that physical!

Mexico got a penalty in extra time. Panama applauded with sarcasm.

Then the ref ended the affair. Panama rushing to the official, obviously complaining. 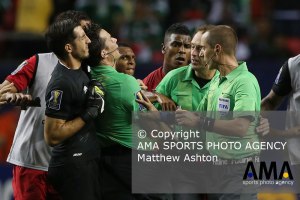 Then it really did kick off. Pushing and shoving resulting in the local Police and heavyweight security marching the officials off the pitch.

CONCACAF officials looked bemused. Upon editing my pictures, I did not really know where to start!

After a Cesar Salad on room service, I went to sleep at 3AM. Walking those same streets that in 1996 I witnessed the infamous Olympic bomb, I photographed some epic Women’s Football games. This night was on a different level though!

After a deep sleep I took the $3 Metro to the Airport. I had a 6PM flight to San Francisco and so I had plenty of time to spare. I look at a guy wearing an Atlanta Braves baseball shirt with a cap to accompany it – when in walks a girl wearing a Boca Juniors shirt with one stop to go. She looks at me, I shake my head. “Estoy a favor de River Plate.” I can’t speak Spanish, she then finds out I am from England, and goes off on one.

From getting on the metro, this girl discusses the merits of the Argentina League to how corrupt she thought the officials were at the game and how she wants Jamaica to win the CONCACAF Gold Cup.

This time I travel with US Airways. For the past two weeks my hold luggage has weighed 48 pounds. Today it is strangely 51 pounds. The lady wants an extra $120 for being 1 pound over. I look behind and see lots of overweight Americans and proudly show my athletic thin body. She has a sense of humour and suggests me taking out something, “A t-shirt perhaps” I shake my head as the scales show 49.9 and I put the t-shirt into my carry on bags.

I can see me turning into Michael Douglas in the Falling Down film again.

In front of me in the security queue is Mr Baseball standing next to Miss Latin Football Girl. In some airports, security has taken close on an hour so I motion to her and ask if she watches the UEFA Champions League in the USA. Today security takes all of three minutes and Football Girl goes left, where to I don’t know, as I go right. I follow Mr Baseball who plonks himself down in a Sports Bar and proceeds to watch Baseball.

Not for me, I sit in the restaurant area then see a man in a Borussia Dortmund t-shirt at an Italian food counter. I suddenly feel hungry. I get up and a girl takes my seat. I don’t know the German man’s name, but lets call him Klaus. Klaus had also been to the game last night. He said that even Klopp could have not saved the Yanks. He had some stern words about the American official in the Panama game too. He was then next in line.

The assistant then picks up a massive cup and fills it full of ice before putting it under the dispensing machine. “You fucking imbecile!” cries Klaus, “I said NO FUCKING ICE.” Klaus is fast becoming my best friend.

Enter Joe – “Hey man back off… he’s only doing his job.” – Klaus stares at him, “What do you mean back off, he is not doing his job. He is a terrible employee. I ask four times no ice and the idiot gives me ice” – The reply of go back to Scotland makes us both laugh.

I walk away thinking that I am usually Klaus. I go on the plane, put on a Led Zeppelin album on my iPhone, the girl who took my seat in the restaurant sits next to me. I don’t say word, shut my eyes and wake up in Phoenix, Arizona.

My ticket says Gate A24. I have no battery though on my iPhone. Back in the day, people who spoke and chatted were the smokers. In 2015, it seems its the people wanting to charge things up are the ones who chat. A kind New York girl looks after my charging phone as I go to the newspaper store and look horrified on the reporting of the past 24 hours.

Not one picture of Klinsmann. Just very uninspiring action photography.

Then an announcement is made about my flight. I do not hear it properly. I grab my phone and head to the desk. Standing there is the girl who sat by me on the plane. Apparently our tickets are correct but most of the other passengers have the wrong boarding gate number on.

The check-in lady asks if we want to sit together. I take a quick look around and see a few crying children and some rather big ladies.. I nod and I go back to the paper shop.

I soon board and sit in my seat. 24A. The girl soon follows. “Hello again” she says. “Alright..” I say knowing I sound so English. Our conversation is broken up, “Hey man, you are in my seat…” I look at the girl, she looks at me, perhaps the check-in lady has double booked… “The man then says, sorry, Im in 31F” and walks off.

I then get, not one, not two but in fact five more Americans claiming that I am in their seat. The last takes the biscuit… Wearing a lumberjack type checked shirt, he stares at the girl and says, “Tell your husband to get out of his seat”.. Moving her position to body language tell she is not my wife she fires back, “He is not my husband and he is in the correct seat.”

A man sitting behind then stands up and shouts at the stewardess, “This European is in the wrong seat” – This presses buttons, “No I’m not.” Expecting another go back to Scotland remark, the Air Stewardess points in a stern manner that she is holding the ticket to seat 24A and that I must remove myself with immediate effect or else she will call security.

Me and the girl stand up. I can see a hullabaloo starting, the man behind wants a fight. Something inside me make keeps me calm as I point out that the gate was A24 and the ticket she is holding is 18C.

Not saying a word, the Air Stewardess walks off, the man sits down, girls says, “That was smart what you did back there…”

Back there… back where? “Don’t you mean just then?…” The girl won’t have it that I don’t work in Silicon Valley and laughs at my Englishness. I say Back Then means like back at the Airport. Not 10 seconds ago.

I can feel the man behind breathing down my neck. “He so needs a Glasgow kiss” I say.. then have to take five minutes explaining what a Glasgow kiss is.

She proceeds to get out a lap top and turns into Miss Spreadsheet. I watch in awe at her computer skills before we are told we have to fly around for 40 minutes due to the Vice President’s plane being on the runway.

Upon getting to my hotel, I watch TV and James Cordon is on. I don’t find any of his jokes funny. Give me Vic and Bob any day of the week. The reporting on the Panama game is shocking on some websites.

Pictures like this showing 90 mins on the clock, Panama walking off would be double paged spreads in the UK Tabloids.

For some reason, I can’t wait to see Ryan Giggs.

I don’t understand this place!