After arriving in Moscow at 0550h, we all had to wait on the aeroplane for what seemed an age. No one was complaining, as everyone was still asleep!

I had a nice chat with a guy from Sydney in Australia. To make his flight cheaper he was off to Miami on his way home for a week after this game.

The bridge which connects the aeroplane to the main airport was broken. Thus we had to get off the aeroplane at the back and be taken to the building by bus. This took an hour! Subsequently some on my flight who had opted for the earlier flight to Kazan – missed it. Were they unhappy? Lets say I received a few WhatsApp messages from foreign photographers already grateful for a chance to stay the whole day in bed whilst I was boarding my 0840h flight.

When I covered the FIFA Confederations Cup last year, my favorite city was Kazan. It is the capital of the Republic of Tatarstan in the USSR, but there was no time for sightseeing today. Straight out of the airport and onto another bus, a shuttle bus to the stadium.

There is no rivalry between the photographers as such. We all help each other. There is a large feeling that karma will come back and haunt you if you leave a stranded photographer at a bus stop or something. As I had been to the Kazan Arena many times I was the one who lead the way and escorted three photographers to the media entrance.

I arrived on the pitch only ten minutes before the start of the game. I had more important things to do – book and pay for more flights to cover this ever challenging tournament. Another $1400 gone! Then another £90 whilst calling Lloyds Bank Visa who had decided to cancel my card AGAIN. Yet this time I found out that they only call back and question personal VISA cards when suspected fraudulent activity happens. Should you have a Lloyds Bank Business Visa card, then they basically do nothing. There was no time for war, no time for a rant or moan, I needed to get pitch side!

I opted for a spot behind the goal. My perfect position. There were no members of the Moscow Camera Club here today. They had taken up all the good positions for the France v Portugal game leaving the word’s best seething on the side of the pitch, but I guess Kazan was not on their radar.

I don’t know Benjamin Mendy of France but when he saw me looking at his colourful boots he waved his legs in the air whilst laughing as I tried to take pictures of them.

Australia were great. They defended so well and stopped the favoured French.

All was going well except my photography. Like others, I was defeated by the heat and the sun. The game looked so colourful and warm on TV but to take pictures was a different matter. Heat was rising off the LED boards which surround the pitch and on the pitch was a terrible heat haze. This resulted in 80% of my pictures being out of focus.

For the second half I moved and sat on the side. Again I thought all was OK until I returned to the media room at the end of the game and faced the reality that today was a wasted day. Most of my work was just fit for the trash. At least my editor back home had an easy day!

Everyone got lucky with one or two sharp and crisp images but the general opinion was that opting for games with an early kick off could be troublesome. 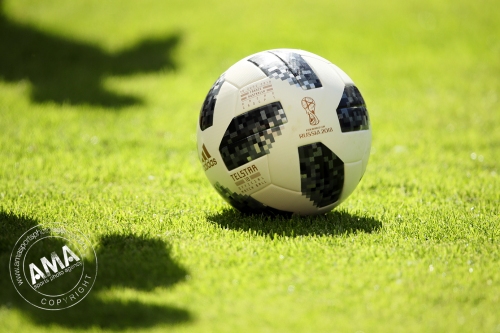 France won 2-1. The video replay deciding that the French must be awarded a penalty. 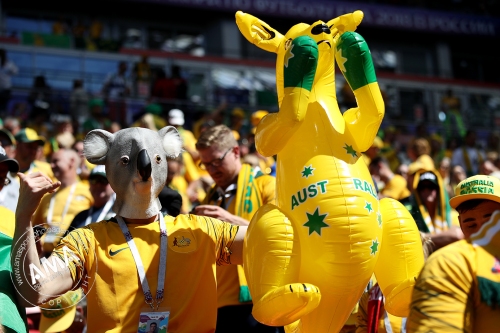 Uber got me back to the airport where I met up with some US, UK and German colleagues. That was after ANOTHER set of x-rays to enter into the airport and once inside, being as though I had already checked in and had obtained a boarding card with Aeroflot, 30 seconds later I was having to be checked all over again.

We all slept like logs on the hour plus flight back to Moscow.

Anticipating my bed, I was disheartened to find that most of Mexico had arrived at Moscow airport, it was absolutely heaving. The waiting time for a taxi was a at least 1hr 20 minutes. Nothing on the three taxi apps on my phone could find any cars. As I had been here before, I used my knowledge and got the express train back into the city and then an Uber Taxi to my hotel, but all this took a good 90 minutes until I saw the imposing statue of Charles de Gaulle in front of my hotel.

More security checks as EVERYTHING was x-rayed as I entered the hotel. Then grumpy chap in his grey suit refusing to let anyone to their rooms until he saw every passport and accompanying hotel registration card. Of course, I was one of those who could not find it. Another ten minutes wait at the reception desk to get a new one. Having your papers is everything. We have given up in trying to make the security men smile. There is certainly not the, “oh you have stayed here for a week, and I see you are going to stay for a further four, so Ill let you pass” – no – it is “show me your papers or I do not let you through.”

Putting everything on charge and getting ready for another two days away, the view of the 3am Moscow skyline from my hotel bedroom was waking up with a warm dawn glow as I went to sleep.