The fundamental basics of photography is to record and document so that others can see what the photographer sees through their eye.

Just recently I came back from New York City with a new wonderful film scanner to digitise my thousands of transparencies and negative films.

Perhaps more about this another time but with the excitement of having to going back and reviewing shoots from over twenty years ago in trying to find old material to re-digitise, one sees things rather differently.

I can clearly see what I was trying to capture back then due to the way I was moving around a subject, trying different lenses etc – however twenty years on it is the one click wonders that I am magnetised by.

Back then I was primarily working for a newspaper with a very particular style. It was very rare I had a wide angle lens on, my style was very telephoto.

Sitting here today, I have no idea what my style is.

Most – and me included would say CRAP! But throughout my travels I have been influenced by thousands of ideas and ways of framing what I see in a 4×3 square box.

Upon doing the Merseyside Derby on Sunday, most simply see what they are shown via their HD screens.

Us photographers have to get there early to guarantee parking spots and for some to mark out where one wants to sit.

This results in hours of thumb twiddling, eating, joking, writing emails or walking the streets in a daze trying to find golden things to take pictures of in the Blue half of Liverpool. 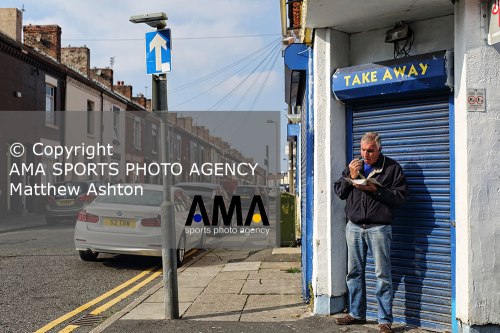 Sundays are for Sunday Lunches – Beef, horse raddish sauce, a selection of tasty veg, roast potatoes and of course gravy. 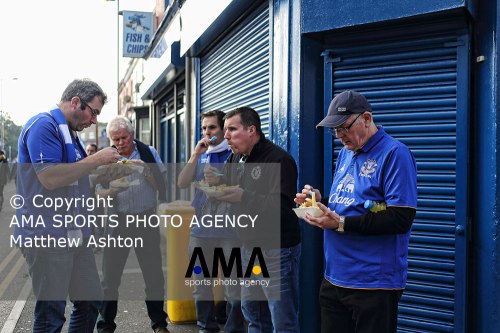 However for the football fan attending the 1330H kick off, most were eating Fish and Chips.

Others were waiting outside their houses waiting for friends to accompany them to the big ball game. 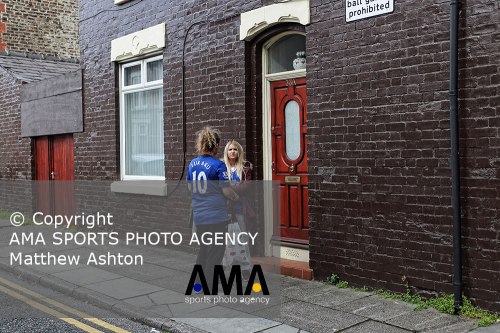 Once inside, of course I was clicking away at the action in front of me however I have not sat in the Gwladys Street End for some years.

I assumed that the violent banging and constant swearing at the referee and calling every Liverpool player a “SHITHOUSE” was a chap with a skin-head wearing a faded white Everton T-shirt.

How wrong was I when I looked around after feeling more phlegm hit the back of my neck when I saw a girl who must have been no more older than 14 screaming at her rivals in red.

To contrast all the swearing and abuse was a girl sitting on the front row with Everton ribbons in her hair.

As she ate chocolate sweets and drank, the other fans around her protected their eyes from the rays of sun. 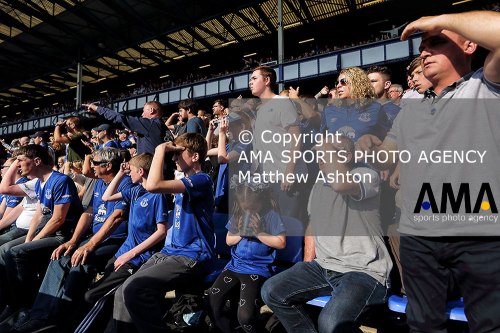 I have been to worse derby matches and I have been to better. Nothing compares to Inter v AC Milan – though there are many derbies still on my bucket list.

In Liverpool there was more individual shouting and screaming rather than an uniform chorus.

Whatever the future holds, I know that my images documenting the fans will help pay the bills more than the rubbish I served up from the pitch!

I will look forward to reviewing this shoot in twenty years time and see how my photography has evolved.

One thing for sure is that I hope stewarding evolves so that the plucky photographer can at least have a proper view of the goalmouth.