Today felt like one constant psychological challenge. When it finished, I was like, I am glad that is over!

I fell in love with Panama last year. They were the host country of a tournament that I covered in Panama City at the CONCACAF Copa Americanos. I have since returned there three times. Visiting amazing places like Isla Colon in the Bocas del Toro, Playa Bonita, and of course the capital Panama City. Apart from Japan it is a most certainly my second favourite country on the planet.

For them to qualify for the World Cup was like winning it for others. The amount of Panama fans here is incredible. They out number the England fans in the queue for my S7 flight to Nizhny Novgorod. Some fans are directed to a manual check in desk. Something is up. This is a very electronic airline, everything is done automatically. My ticket fails to get registered so I too join the line unaware of the issue.

My seat number is scrubbed out and replaced with 27F. I join others on a bus, we wait. Wait a bit more then in a stern voice a Russian S7 lady points and says, “GET OFF”

There is no announcement, no one has no clue as to what is going on. Someone then looks at their S7 app and sees that the flight is cancelled!

Luckily I am near the check in desk and somehow find myself back on the bus sometime later. We get on the aeroplane but it seems to be a free for all. One guy from Panama kicks off that he can not sit in the business seat that he booked. I have no England shirt on, I have no Panama shirt on, but I have a Curacao top on – Curacao is an island North of Venezuela that I visited whilst in Panama. Somehow I’m an attraction to this guy and he bellows out Spainish. I understand bits but he is totally mad that he can not sit in a business seat when he has paid for it.

I then sussed out that he spoke English so said, “Look this is Moscow. Just be grateful we are going now. It is not Allbrook…” <The local airport in Panama City> – he laughed and said OK and went on to be amazed on how an Englishman loved shopping in the Allbrook Shopping Centre, let alone had used the airport!

Then an Irish Journalist ripped into an innocent air stewardess. “Your airline is SHIT” he shouted. I had had enough! I should have walked away and had a welcome one more minutes sleep but I most certainly made my point clear that the plane delay was not the fault of the air stewardess and that S7 were anything but shit! Shit airlines were RyanAir where he came from.

I don’t think that I have any stress inside of me at this tournament but it felt good putting an idiot in his place. Perhaps I need putting in my place but at certain times, certain things have to be said!

The stadium was like a sweat box. 32c. Energy sapping, humid and even though I crave for the Qatar or Californian heat when it is cold, today was almost unbearable.

And then Hernan Gomez the Panama manager recognised me and with a smile almost posed for pictures during the national anthems. He is like a friendly lower league manager. Always says hello with a smile. Not many football coaches have thanked me for covering a football tournament – He did last year. 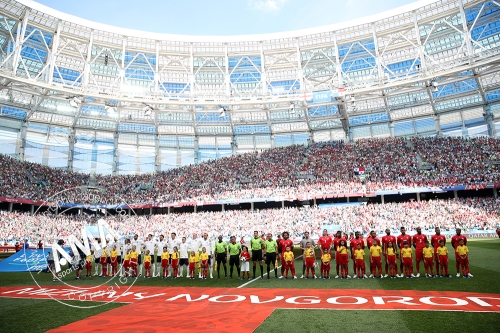 The teams changed around. There were not many photographers here so many were able to swap ends and cover the team that they came to cover.

I guess the surroundings looked OK on TV. There were two massive screens either side of the goal. At pitch side it was a total nightmare. How long have I been doing this? I felt that I could not work my camera for toffee. The sun and ever changing light was so challenging.

At the time I thought I had not captured anything very well, but upon looking back in the media centre I was being too harsh on myself.

My Manchester United hero Jesse Lingard got my confidence back up after Stones and Kane questioned why I was doing this job.

The England support was anything but loud. Certainly the stadium was not awash of St Georges flags like at previous World Cups. I guess not many have travelled here.

And so the game was over. I took a bit of a timeout and watched some of the Senegal v Japan game on the screens in the media center. Dare I say, Japan look strong and at last show some of their culture of being a nation that never gives up. 2-2 was the score. I have no idea of what happens in the other games. I tend to forget about the other games that are taking place.

Traveling back to the airport was easy. Being at the airport was another testing experience. The airline had double booked about 8 people. I had paid $600 for the normal $100 seat, and the guy sitting in my seat had paid $900! I think the guy was from Switzerland, but before another sleep, we discussed a very interesting cultural difference. Russians NEVER explain anything, but to be fair always, up to now, find solutions. As a result it is better to simply go on your way like nothing had happened rather than like the British attitude of wanting to write a letter of complaint, slaughter the airline on social media or like the chap said, demand compensation.

Then it was raining. No Uber Taxis. The Get App was showing 4850 RUB for a taxi back to the hotel. Following a Panamanian couple from the familiar to me San Francisco Area of Panama City, they showed me a direct rail-link to the city. A very comfy train with excellent free wifi.

Going through endless amounts of security now seems second nature. More security to go on the train, the metro but I did it without a care in the world.

I never really appreciate smiles or notice them anywhere I go. But here, mostly, no one smiles.

Despite losing 6-1 the Panama fans celebrated their goal like they should. It is their first world cup and it was their first World Cup goal. 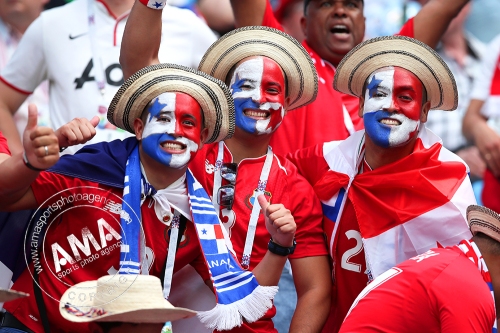