After a terrific week falling back in love with football again covering Schalke v Chelsea and Anderlecht v PSG, the weekend saw me cover two very different types of football.

Saturday was at the glamorous setting of Old Trafford where Manchester Untied took on Stoke City. Yes, I do have a big soft spot for the Red Devils, my grandmother was aware of my unhappiness at junior school when I was about 7 with all my fellow classmates supporting Liverpool who back then were winning everything going – I had no love for Liverpool, only Shrewsbury Town!

My grandmother educated me all about the Busby Babes and told me about how all her generation admired Manchester United for rebuilding the team after the Munich Air Disaster. People were more respectful and less angry back then. Nowadays, everyone is a Manchester Untied fan for their success or hates them because of it, but for me, because of my Grandmother, there is a little bit of MUFC in me.

Saying that, I should have covered Shrewsbury Town at Brentford. I see enough of TalkSport commentator Sam Matterface in the media centres of football grounds, but have never encountered his Brentford supporting Sky Sports News presenting wife Natalie Sawyer. Tweets and Facebook pictures of my Shrewsbury media friends posing with her at Griffin Park made me wonder why I was at Old Trafford.

Peter Crouch upset the apple cart yet again for Manchester Untied prodding home the ball and subsequently running straight towards me to celebrate which made a great picture – the ball captured on the end of his boot when in fact it flew into the net – the beauty of photography.

Perhaps my bad luck run was to end with a bang. At half time it was 1-2. United weren’t going to lose again were they? Was I finally going to get a nice spread in the English newspapers again?! All the other photographers were covering Manchester United attack first half.

Throwing on Valencia, Januzaj and Hernandez  together with Kagawa, Rooney and Van Persie, it took quite an effort for Manchester Untied to come back and win 3-2. The Crouch pictures now meant nothing as I was clutching at straws to find editorially relevant images for the Sunday newspapers. Who cares about Stoke’s goal when Man Utd come back to snatch a much needed victory?

I have not personally met David Moyes since the day he departed Shrewsbury Town but when he was club captain, I ALWAYS took pictures of him – coaching kids, walking around our historic market town, training and playing for the Mighty Shrews at Gay Meadow and of course on many an away ground.

However most of my black and white negative collection got ruined in a flood which tests me at my weakest times especially when picture editors ask for David Moyes in his past life as I quite literally had thousands – if only.

Showing all the emotion of a man who has to stand opposite the Sir Alex Ferguson stand has his team struggles, with banner showing all the trophies his predecessor won – and if thats not enough, the great man sits behind him, I sensed more bad luck for myself when sitting next to me the Press Association photographer had a wee grin on his face – and rightly so, it was a lovely picture and he had got it too. Thats the nature of the industry I am in and so although my pictures will probably make some foreign publications, I made sure I did not come home empty-handed as I stayed behind until the crowd had disappeared to make sure I left with something valuable for the library – yet another image of Old Trafford! 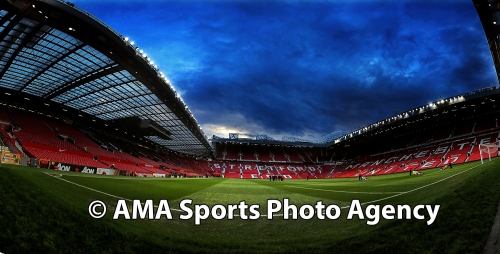 With Shrewsbury Town defeated by Natalie Sawyers Brentford, my lust for clutching on to a victory was satisfied once more when early Sunday morning, I got a text from Japan to tell me that Jubilo Iwata had lost at home to their rivals and my J-League team Shimizu S-Pulse. Also my Scottish team Clyde had won 2-1 on Saturday. Life was not so bad after all!

So working on Sunday – my Tuesday of the week, I was back at my not so favourite stadium of Wembley for the NFL – American Football encounter in  London, England.

After shooing in perfect daylight balanced lights in Germany and Belgium and indeed at Old Trafford, Wembley’s floodlights are a horrible cyan/green colour. It may look lovely on TV but it does not half test the professional photographer who refuses to use everything on automatic – and horrendous rain storms were forecast. 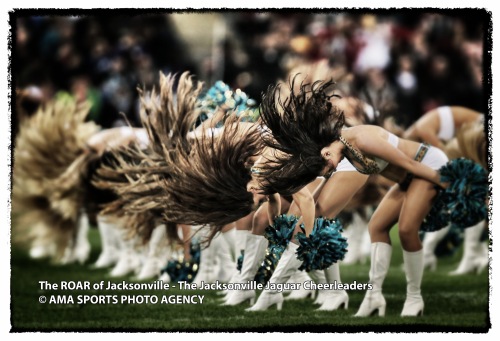 I have shot a fair bit of NFL. I used to watch it on TV on channel 4 and because of Joe Montana – the 49ers were the team to follow when I was growing up. However later in life, I went to the Packers, Bears and then the Patriots. Perhaps it is because New England are the nearest NFL team to the UK, my fondness for the Patriots got a bit embarrassing as everyone thought I was a glory hunter because of their amazing run in recent years.

Is NFL easy to shoot? Yes if you know the game inside out. The only frustration is unlike in the USA, the Wembley Stadium set up makes it even more challenging – and not me moaning but the opinions from the US photographers who chirp on about how it is different back on the other side of the pond.

Busybody stewards trying to get photographers into line where quickly over delegated by HUGE NFL security men. AND in suits so not to ruin my backgrounds unlike at most football grounds where nice pictures have luminous yellow and orange blobs everywhere from the jackets that the stewards wear.

Perhaps the stewards should have Policed it better as I also collided smack bang into a NFL commissioner – but he was SO polite and with smiles and of course I apologised myself for bumping into him too. We ended up sparking up a little conversation about the possibility of NFL in the UK one day. It was very refreshing and it reminded me of the London Olympics at Wembley where many discovered that if photographers are actually left alone and left to do their job without being over policed then the world seems to be a better place for all. 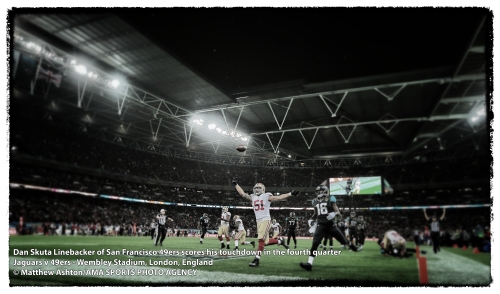 For the record, the Jags were awful. The 49ers won quite easily. I was so mad with myself when the first touchdown came my way and I used a too long lens and basically cocked up in spectacular style… to the point when the next one was scored, I simply used the widest lens I had and was quite pleased with my results, however I would have preferred to have been in Candlestick Park in California!

I sat patiently and instead of churning out 40 or so action pictures like I have done in the past, I waited until the action came my way. What I had got was OK but there was not exactly an abundance of material. I guess I didn’t do such a bad job as my friends from America were not demanding anything else as I got absolutely drenched walking back to my car – however I’d take that any day – a dry game time is all I ask for mostly!

My ideal Monday will be knowing I have the back page of an English national newspaper from the Man Utd game and the back of the San Francisco Chronicle from the London NFL game – without being defeatist – it probably won’t happen! – but an abundance of nice library images which will hopefully get published in time and contribute to my pension.