We returned back to the hotel in Donetsk.

“Where is the towel…? We have one missing….” the stern looking hotel receptionist said. She takes no prisoners.

I went back to sleep. Others played football in a Ukraine Media XI v England Media XI. My mate Nick returned confused after featuring in the 4-0 media team victory.

Playing in front of Chris Waddle and behind Stan Collymore, Chris was telling him to move forward with Collymore screaming to stay back!

And so we went to the Donbass Arena for the final game in Group D. Host nation Ukraine v England.

I would love to come back here for a Champions League game. This stadium is great. Everything surrounding it is decked out in UEFA signage. Huge festival concert-like fences break up the normally amazing parkland around it.

If Man U draw Shakhtar in the Champions League then I’ll come back… see I’m finally warming to this place.

There was not a hint of trouble. It was just like the old days. Fans from both teams sitting (well standing) together. No racism boos. National Anthem respect. Everything the scaremongering BBC said it wasn’t. Even my Japanese friends who sometimes go about with huge trepidation are smiling.

Today things came into place. I have found it hard to get some pictures prior to game time.

People ask me how do I take pictures. It is mostly instinct I guess. The camera you have does not matter. It is what you see and how I see. For two weeks I have seen nothing! Today was better. Had I woken up? NO! It was the fact that there was more of an opportunity to take pictures today. Thousands of fans supporting the host nation of Ukraine. I could not go wrong. Far better than 200 corporate Denmark fans.

It did not rain either. 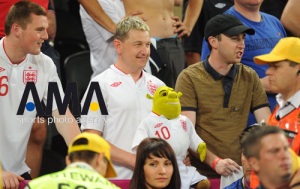 The man with Shrek was there again. I must ask him his name next time. The other day I was looking at my online archive and found pictures of him all over the place, including when Russia hosted England. Shrek that day was wearing a huge Russian hat to keep warm!

Sat on the side in the first half, England were cruising really. Soaking up pressure. Not much action to shoot but when it did happen it resulted in OK pictures.

Second half I was next to a TV camera. First instincts thought I would be OK but then I saw huge gaps behind the goal as other photographers did not want to try their luck sitting behind the Additional Assistant Referee. I had nothing to lose.

I moved my office to the six yard line. I had so much space!

My positivity and decision-making paid off. Rooney scored right in front of me!

Goals usually pay the bills. At the end of the game everyone said that they were blocked from the side where you could see Rooney’s face. Those sitting TV side got the glory though. The picture editors deciding to go with an image showing the red 10 on Rooney’s back rather than the shot I got.

It’s frustrating. I should not go mad. I know the score but I often think why do I bother. I then find a double page spread in The Sun of Steven Gerrard. I am most certainly not going to hit my previous best of 89 pictures in the UK papers from a football tournament like I did in Germany in 2006. Times are tough. Newspapers have very little budgets.

My feature work has to improve. This is more than shooting 90 minutes of football. It’s the fans, stadiums, atmosphere, colour plus the little jobs you always keep secret from your colleagues for the fear of them pinching them off you! 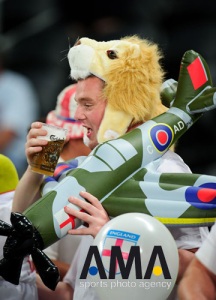 I went to bed looking at flight prices for the Semi Finals should England face Germany. Via Moscow it is £1,600. I want to and have to do the Semi Final in Donetsk too. Donetsk and Warsaw don’t exactly have amazing transport relations. It is hard and expensive. If it was the World Cup I’d put it on the Amex and worry about it another day but I have my excellent snapper Chris in Poland and I’ll sit and watch it on TV somewhere in Kiev!

It is the final people remember.. not the semi.

I seriously need to recharge my batteries. Get some sunshine and fresh air. We are all weak and tired. Other photographers say they have lost their zest too. Normally I am pining to do another game during football tournaments. On this one I am grateful for a 4 day break.