For the second year running, it was billed as the big one – David Beckham facing his old team of Real Madrid. 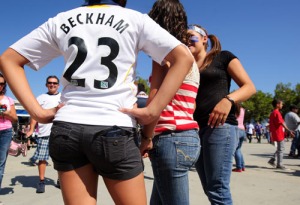 The Americans trying to make it bigger by playing the fixture in the old Coliseum stadium in downtown LA which staged the Olympics. With the Raiders long gone due to the fact this old stadium does not facilitate corporate boxes, it was a big ask to fill this once epic structure.

Sorry, it didn’t work. Play it in the Home Depot Center the home of LA Galaxy next time. Would  Tottenham or Chelsea play such an epic fixture at Wembley? No.

Mourinho still has it. Even the straightest of men feel uncomfortable when in the presence of Jose. Dark trousers (pants in US terms), a white polo shirt and a grey sweater hanging over his shoulders, he simply walked past the 20 stone security men straight onto the pitch without any accreditation around his neck still with the attitude of I am the special one.

With the girls in the crowd screaming as Kaka and Ronaldo came onto the field to  warm up Beckham was hardly noticed – except for the photographers waiting in anticipation.

Beckham’s boots have always been a focal point of his attire. If David does not sport a new hair cut lenses drop down to his ankles to see what kind of boots Adidas have produced for him this time.

Over the years he has sported many a design, but never pink.

After the birth of his daughter Harper, David wore pink boots with the names of his now four children stitched into his football boots with a flag of the United Kingdom on one foot and the stars and stripes of the United States on the other.

The game started off slow. Real Madrid were only going for it at about 20% of the pace that they play competitive football and to be honest still quite comfortably easing past the LA Galaxy no matter how hard they tried.

With the game won at half time Jose put on his remaining players in the second half which included the likes of Ronaldo, the unassuming Mesut Ozil and the almost forgotten Karim Benzema. Even the most ardent Everton or Manchester United fan would have watched in awe as the ex-Liverpool midfielder Xabi Alonso controlled the game with ease. 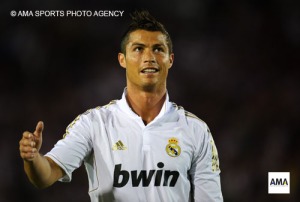 Jose flicked a switch and his team went into overdrive. For 15 minutes they were like an unstoppable steam train showing the Americans how to play soccer. They did their stuff, scored their goals and then went back to a canter.

It was a simple workout for them.

The American photographers could hardly keep up with them and were astonished by me commenting that European football was like this for 90 minutes. It was like a different sport to them seeing football being played like this.

Jose hugged Beckham as he was taken off, Ronaldo scoring the kind of goal that the Old Trafford faithful still miss. Will Real win the UEFA Champions League? Probably not, but they showed America what real football was like played the Real way.

The end of the game signalled sending out Beckham picture after Beckham picture to the world’s picture desks. And of course multiple pictures of his pink boots unaware that the next days newspapers would publish facebook images of David and Victoria with little Harper. 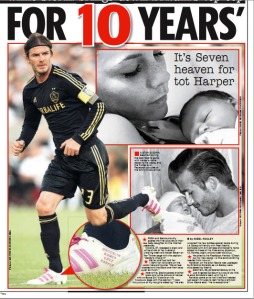 My images have graced the pages of newspapers amongst the football photographer greats but never alongside Victoria Beckham!

After doing this job for so long I don’t actively collect my cuttings any more but on this occasion a byline in the Daily Star alongside a byline of Victoria Beckham was one to keep.