What a difference a day off makes to the soul. I don’t know if it was because we are at the business end of the competition but today was good.

I arrived at the Al-Gharafa Stadium hopefully expecting a photo ticket for the start of the Quarter Finals, but like some others, computer said no and I had to be put on the waiting list.

I used the spare time to the full and took out the replica FIFA World Cup trophy that I  purchased yesterday.

Alas Doha resembled Milan in the early Spring today. Grey, dull, foggy and certainly not the bright, contrasty light I have come to expect. It is winter here after all. And I as I keep preaching, you can only shoot what is in front of you. 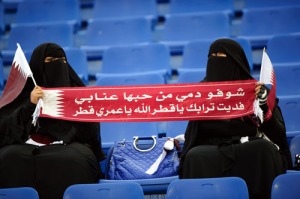 I got a ticket without any issues and headed out doing Qatar attack in the first half.

Surprisingly I had lots to shoot up my end. Qatar went in front 0-1. Qatar started the competition in shocking fashion.

They were awful. I laughed when I saw newspaper headlines proclaiming that the coach wanted them to do a ‘Spain’ and from an initial defeat, go on unbeaten and win the tournament.

To be fair, Qatar had got better. They destroyed China and gave Japan a good fight.

A few of us played the “Throw in” game again. Representing Europe, I can only apologise for my shocking display so far. The game consists of doing an upright photograph of someone taking a throw-in. The players arms have to be in the bottom corner of the frame and the aim is to get the ball positioned as high up the frame as possible without cutting it off.

Some photographers including myself try and capture the goalkeeper taking goal kicks with the boot just touching the ball. But that is easy compared to this game.

I started playing another game very soon. The simple game of being in a stadium and taking pictures.

As the Qatar Camera Club checked the back of their cameras every five minutes, I became very aware of lots of grumpy Japanese and indeed other nationalities who just simply wanted to take pictures. One Indian gentleman was going crazy!

Perhaps we are all up ourselves as it has been suggested I am (!) but there is a definite divide between the old photographers who used film and the new digital users. When we used film, the skill was in exposing the film correctly and hoping it was OK. With Digital cameras, one has the ability to instantly check everything. I feel it is counter productive. I see lots of photographers who seem nervous and lack confidence.

One guy next to me was checking his exposures literally every time he took a picture. This was REALLY winding up the photographer the other side of him.

We then questioned if he understood how to expose correctly and use the in camera meter to prevent him not having to check his pictures quite literally every five seconds. He replied that he had been a photographer for 6 years and was not like some of the other amateurs around the pitch.

But as Japan got a man sent off, Qatar scored to go 2-1 up, only for Japan to claw it back to 2-2, this photographer seemed to be missing everything. 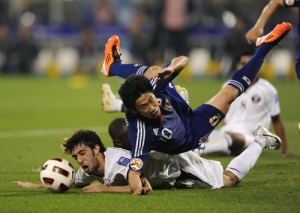 Shinji Kagawa burst forward and got taken out which created easily my action picture of the tournament. However Inhoa cooly slotted home the winning goal with seconds remaining which I missed. The celebration went the other way and it mean that I got nothing.

Our new friend missed it too – Endo made a great tackle about 15 seconds prior and ‘he’ was so busy checking his picture that he missed the winning goal – but then so did I, though I did get a nice action picture… perhaps he did too, but I got the other one so win 2-1.

The host nation was out.

We ran to the awaiting shuttle bus at the end of the game and most of us promptly fell asleep including myself.

I woke up with the Khalifa Stadium in sight. After what seemed like an age to go through the security check, I just watched the game on the giant screens on the Doha Tower over looking the stadium.

Again, no ticket as I was not on the list, but chose seat number 38 and headed out. Twenty minutes had gone, it was 0-0. My sunglasses broke yesterday (that will create some chuckles to my friends) but I wish I had them when I walked into the stadium. It was bright.

Any photographer who does not wants the World Cup here needs his/her head looking at. The lights are stunning. I was shooting at 1600ISO at 1/1600 at f4. The equates to 1/800 at f.28 at FOUR HUNDRED ISO! The white balance a perfect 5000k. I want every match to be here – a night fixture of course!

Jordan were very flat in the first half. They needed to perk up. The second half did not start well with the goalkeeper making a right tit of himself letting Uzbekistan go 1-0 up. Soon after it was 2-0.

The screaming Jordan fans behind me went into raptures as they got a goal back. The first half minutes were dull, but the second 45 was end to end stuff.

I really felt that I had woken up and the tournament had woken up – or was it because of the three cans of Pepsi I had drunk during the game!?

The best team won and Uzbekistan qualified for the semi-finals. I was pleased, especially as I still do not yet have a team group picture of them! 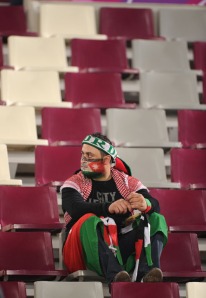 I was sad for the Jordan fans. They seemed very European in their end of match reflection.

Many were left pondering what could have been unlike most of the Qatari crowd who just left the stadium like they had just watched a film in the cinema – and that was not even staying behind to watch the credits roll.

Another evening of editing followed. Two games again. Tomorrow I have to cover the other two remaining Quarter Finals.

Will Uzbekistan get to the final? That will be even more scary – however the way they are playing, it would be no surprise. My money is still on a team from the Far East though.