The day started off with another pointless argument with the Qatar Security Police.

On arrival to the media centre EVERYTHING has to go through security Xrays.

Blatantly copying a fellow photographer who did the same thing at the World Cup in South Africa, I decided to take a picture of my 600mm lens going through the X-Ray Machine. In SA everyone was greeted with smiles. In Qatar we just get stern looks. The security people fail to speak English or French and on this occasion I was luck not to get arrested.

Anyway, onto the game. Football the world over is steeped in controversy and certainly this match was. I don’t like Bambi type football where no one can tackle anyone without getting a yellow card. In this game, shirts were being pulled and elbows were out in force but it added to the toughness of the game.

However in the second half, the Japan goalkeeper took down the Syrian forward. Penalty said the referee.

I was shocked to say the least.

The Syrian attacker was offside. How could the officials fail to see? I was sitting at the other end!

In the year 2000 when I was lucky enough to spend a lot of time with the then Japan manager Philippe Troussier, he said that his main gripe was that the Japanese needed to toughen up, they were still too polite on the football pitch.

I hope he was watching as 11 years on from 2000 when they won this tournament in Lebanon, when the goalkeeper got the red card in superb Roy Keane-like rants, the Japanese players went crazy at the Iranian official.

Syria scored from the penalty but Japan got the winning goal thanks to another penalty scored by Honda. This was a great game for pictures. It most probably looked bad on TV but everyone was pleased with their catch today. Lots of running with the ball, agressive tackles and a nice background instead of horrible empty seats as seen in some stadia.

Again a stark contrast in the culture of fans from what I am used to.

I would not exactly expect to see a Stoke City fan proudly hold up a picture of Prime Minister David Cameron at an England International.

However fans from the Middle East especially do like to take the odd poster of their leader with them to the stadium!

Highlight of the day was meeting my old friend Shinji. I have no idea on who Shinji works for, but I have know him for years. I don’t even know his surname! Shinji always turns up for the major tournaments and of course was to be seen here in Syria.

On the bus back to the hotel, I asked an Arabic journalist to translate a picture that I had taken of a Syrian fan holding a sign which I guessed related to the World Cup as I cold read “2022”.

The helpful man told me it meant “Congratulations to the people of Qatar 2022”.

Shinju laughed saying he had no idea on how people could understand such symbols!

I hit back saying that he was one to talk with Katakana, kanji or hiragana in the Japanese language. What was wrong with A B C?! 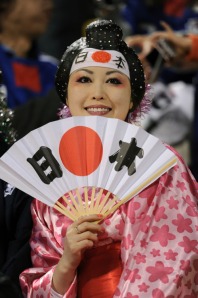 Shinji was looking through my pictures whilst we were having this discussion and as always laughing constantly at my snapping of the Japanese girls.

Knowing how he failed to get the ever lovely TV presenter, Miho Shiriashi to come and speak to me many years ago, he always has a mean glint in his eye saying that he would never fix me up with a Japanese girl because of the communication difficulties.

Like always I just stared back and in a completely over the top kind way, demanded to know what the Japanese words were on a fan held by a female fan I had snapped at half time. Shinji became a father like figure and like asking a child a question simply said, “What do you think it says? What does it say? Read it for me…” – Nervously I looked, looked more then just like I somehow look at English characters and my brain translates the script into language, inside my sunburnt head the word “NIPPON” came…

He said I was correct. A milestone in my life! I can now officially read two Japanese words, the other being Tokyo!

We spent the rest of the journey wondering how the Arabs read the Arabian scripts.