Being happy in the work place is important in any job. My work place changes from day to day, sometimes afternoon to evening.

After a 2pm breakfast – I slept and slept and slept last night, I went on the media shuttle bus to the Jassim Bin Hamad Stadium, also known as Al Sadd Stadium, home to Al Sadd of the Qatar National First Division.

When I was about 16 I used to spend my evenings going to football matches and exploring new stadiums. When Shrewsbury Town did not have a game my friend Rachel and I used to get the train and go to Chester City FC. We used to get excited because it was a new stadium. Chester’s old ground was not exactly Wembley Stadium but there was an anticipation of being excited inside both of us.

Of course there are times when you think a stadium is going to be ‘brilliant’ – like when I first went to Real Madrid and Barcelona, both in the same week. This is where most common folk assume I am up myself or spoilt, but the fact is that these apparently amazing stadiums are anything but. I don’t feel anything. They are just big stadiums, steeped in history.

However when I was with the rock band Simple Minds and they were playing at the Westfalenhalle, I could see the Westfalenstadion in the distance. It is where Borussia Dortmund play. It seemed like a Mecca. A magnet. I knew one day I had to go there. And one day I did. To this day it is still one of my favorite work places on planet earth.

After three days of being in wide open stadia, which were ‘OK’ today’s new experience hit me. Like tourists marvel at gothic cathedrals in European cities, like back packers clamer to see the monuments I went wow the moment I saw the Al Sadd.

It was everything that the stadiums I go to in England are not. It had stunning architecture, it seemed to have a pulse and was wooing me inside.

Simply why can’t new stadiums in the UK be built like this? The closest are some of the smaller stadia in Holland.

It was definitely a new entry into my top ten stadiums in the world.

It only holds 15,000 but that does not matter. It just seemed so perfect in every way. I felt at home here, very comfortable. Just as the Islamic people of Qatar face Mecca and prey every day, I was facing the goalposts and I was in my Mecca. There were not many photographers here for this fixture. But those who were had their heads up at 45 degrees, panning left to right and nodded at me knowing that they too liked their new surroundings.

Just as my eyes were wide open feeling inspired in what is sometimes a monotonous trade, the local Qatari people stared at people in yellow shirts carrying Kangaroos.

On the pitch this was a historic game. India had not participated in the Asian Cup for 24 years. Just as the stadium had bowled me over, I was stumped to see so many Indian football fans – I thought they only liked cricket! 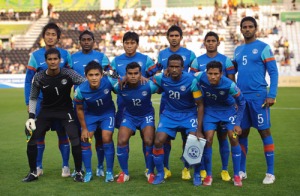 The only famous Indian footballer I know is Baichung Bhutia, but he was injured.

The Indians went into bat facing the seemingly almighty Australia full of stars who play or have played in the English Premier League.

Knowing your subject before you start work as a football photographer is important. Managed by Bob Houghton – he was in charge of Malmo when they played Forest in 1979 – both teams resembled their cricket brothers in a Twenty20 match wearing colourful kits.

Tim Cahill was on strike and had some neat deliveries from the wings. It was not long before it was 0-1. Then Harry Kewell – he could not stop smiling the whole game – connected with a sweet drive to make it 0-2. At half time it was 0-3.

I intended to do India attack but although they did run and chase, I though my afternoon would be more productive doing the Aussies. In the second half Tim Cahill make it 0-4.

At the end of the game, I ran like mad out of the stadium and into an awaiting vehicle with some journalists and the driver took us to another stadium. Today was not over. It was only half time. All five stadiums are in the city of Doha. Although the traffic is sometimes bad, a few of us felt we could make it to the other contest, South Korea  v Bahrain. And indeed we did!

Going through yet more security at the second stadium, my expensive big lens ‘fell’ off the conveyor belt of the x-ray, as did an Italian journalists computer. Being Italian he went crazy. Arms waving, shouting in Italian. The security people did not care. They simply did not care. The organisers of this tournament have done a top job. The only aspect of the tournament being a let down are the Police force and the Security people. Weeks of meetings, months of planning and pages of documents have been a waste of time as Police Chiefs tell their robot like staff to do things differently. This is where everything comes to a halt. Today going to the India game our bus was diverted about 1km up the road simply because the  Policeman directing the traffic refused to let the official media bus into the closed street despite having enough credentials stuck in the window to be parked up alongside the Emir’s vehicle. (the ruler of Qatar).

When having a rant, its important to be polite and sincere first. I saw a media officer from China who I know quite well and firstly explained how they were doing a great job but were let down by other factor. Someone else who shall remain nameless then started a rant to me on how they were banging their heads against brick walls with the outside forces not listening to the requirements and if the Police closed the roads then they did just that and it was a miracle that the teams could get to the stadiums sometimes, let alone us poor souls.

I knew these people were reading from the same hymn sheet as me and so I just mentioned the security x-ray encounter where the operators firstly had no idea what they were scanning and secondly had no concept, understanding of consequence if they let a bag fall off the conveyor belt onto a hard tarmac surface. They appreciated my concerns and thanked me for listening to their frustrations too.

Rants over. It was time for game two. 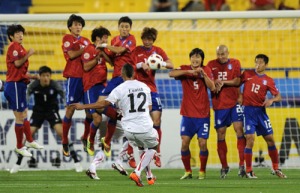 I walked into the stadium just as the anthems were being sung. I would do both these teams again.

I had been to this stadium only two days before and although I have had my cameras for about two years now I am still learning how to use them. GIVE ME AN F5 BODY AND A ROLL OF FILM!!!

Photographers are like TV cameramen nowadays. You expose for white and not like on film, 18% grey. Colour balance is vital to exposure. Us old timers who strive for perfect pictures get ged up. Well I do.

I did a white balance from an advertising board and set to work on my second game of the day. The LCD screen on the back of my camera showed my images too magenta and dark. However on my computer they looked fine, absolutely fine. I did not check one picture for the rest of the game. I did it the old way and exposed using the light meter in the camera.

None of this checking and double checking the back of the camera looking at the instant results of a shot. I have faith in my ability to meter properly and once I had done a white balance there was no need to check up on my shoot.

Perhaps the last paragraph is a secret dig at the idiot photographers who constantly check and look at their pictures, pushing their lenses out in front of them so that they can see the back of their cameras. I happens at every World Cup and its happening again. One of the Korean photographers starts kicking off and yours truly joins in.

In a stern voice, a Japanese photographer tells another culprit that he is here to work and has all night to check his pictures AFTER the match. Nods of agreements from those who never send each other Christmas cards, never phone or email but are the best of friends every time we get together be it anywhere in the world send these idiots into feeling ashamed and it is another victory for professional football photography protocol.

I churn out pictures that I have done for the past twelve years. Today I followed Park who plays for Manchester United, the old swopping shirts picture always makes an interesting snap.

Perhaps there is nothing new to shoot anymore.

I’m not getting bored – no way. Once I have shot every team and got a decent set of library pictures of each player I will put my foot down and get more creative. I have a few ideas for when I return to the Al Sadd.

So like always, the lonely sports photographer makes his way back to the hotel and watches utter rubbish on TV eating Spaghetti Bolognaise whilst editing two football matches. I finish at just before 3am.

Thanks to Facebook, I hear about a friend of a friend who has smashed their car up and is interested in my car that I have had no time to sell. Another has a poorly cat. Another is on holiday in Portugal and I take back all my inner frustration at him not responding as I wrongly assumed he was at home watching Sky Sports News.

All photographers know – never assume anything!

I think back to when I shot on film…. I think modern technology does not aid one bit. I seem to be working longer and have less time. Perhaps I am shooting more and editing not one but two games is a longer process.

I am not film developer, film editor and captioner. Before I was just a photographer.

Not that I mind, but I want to explore Doha. I could see South Africa when I was driving about. But then I am being too hard on myself. I am already tired from not sleeping enough.

One thing for sure is that I am not going home with a sun tan! No time for being ‘on holiday’.